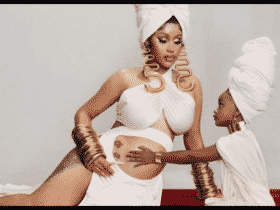 Cardi B Gives Birth To Second Child With Offset!

The pandemic has changed our lifestyles drastically. All the travel enthusiasts had to just go through their old photos. All movieholics had to settle for the small screen instead of big lavish theaters. But the world has to move on. Movies started releasing on all streaming platforms. Half of 2021 has passed in no time. So here is a list of the Top 5 Bollywood movies so far in 2021.

Join the comedy-drama of Lal Bihari who is a poor farmer hailing from a small village in Uttar Pradesh. Despite being alive he is declared dead on official papers but he fought the corrupt system for 18 long years to get his name and self-respect restored in the Government records. Pankaj Tripathi who plays the lead role is one of the main reasons to watch this movie. Monal Gajjar has done a great job as his wife. There is a comic touch added to the movie as the protagonist exposes the serious problem in our system where a greedy relative can bribe a Government official to declare Lal Bihari dead just to take away his property.

Adapted from the famous Novel written by Aravind Adiga, it narrates the story of a rich wealthy Indian family’s ambitious driver who uses his wit & cunning skills to become an entrepreneur. Adarsh Gaurav is a fresh breeze of talent who did intense hard work in order to prepare himself for this realistic role. Priyanka Chopra and Rajkumar Rao did complete justice to their roles. One can sense the real feeling of inequality while watching this movie. One of the great movies of Bollywood 2021 is White Tiger.

This is a quirky movie with feminism as its central theme. The movie revolves around a young girl who became a widow within just 5 months. However, she is unable to feel the pain due to the dearth of attachment for her beloved. Meanwhile, her family thinks that she is not able to bear the loss and has gone crazy. She discovers the facts of her late husband which she was unable to discover when he was alive. The entire cast is brilliant and the music makes the movie even better.

The storyline is based on a tigress which is the reason for the chaos in the village. Forest officer Vidya Vincent (Vidya Balan) is appointed to look into the matter. She teams up with a team of hunters and special officers (Sharat Saxena, Neeraj Kabi) to find and kill the tigress before she makes her next move. Director Amit V. Masurkar has done a great job as there is no dragging in the movie and he hits the right note. The screenplay keeps one hooked and the cinematography is bliss to watch. This is one of Vidya Balan’s best performances in her career. All the actors have done a fine job in making this movie.

This is a movie for all mystery and thriller lovers. This movie will grab your attention till the end. The storyline is based on the death of a girl who is the daughter of an ex-judge. Her family along with her acquaintances become suspects in her death. Manoj Bajpayee is great in this role and Prachi Desai does justice to her role. The screenplay is the reason which is perfectly knit together and will keep you hooked. Manoj Bajpayee’s comic timing is spot on. For people who love Murder mysteries, this movie is worth your time. A good thriller story for Bollywood 2021.

You may also like this article on Loki Season 1