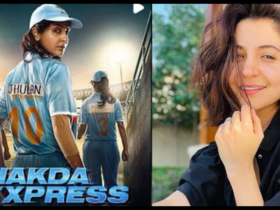 Chakda Xpress, Anushka Sharma’s Next Movie Is Gaining All Sorts Of Appreciation

UPSC is, without a doubt, one of the most prestigious examinations in the country. Lakhs of Civil Services aspirants give the exam every year. However, only a handful of them are able to achieve their dreams. Additionally, becoming an IAS officer or an IPS officer is one of the most formidable positions to accomplish through this highly competitive exam.

However, when you aim to achieve your goals, you look towards nothing but only where you want to go. Such is the inspiring story of the aspirants from Bihar. Where the students have made a coaching centre out of Sasaram Railway station. Yes, we know you all are surprised. Bihar is also popularly called the hub of UPSC, just as Kota is famous for IIT.

The aspirants sit on platforms 1 and 2 every day for two hours in the morning as well as in the evening. Cracking the UPSC exam is no walk in the garden, and these aspirants are well aware of the situation. Additionally, this is no new thing for the city, and the same has been going on since 2002-2003. However, during those times, the number of students studying on the platforms was much less than that of today.

You May Also Like To Read: Barack Obama’s Message For Youth

But why do they study at the station?

We all know that while the situation of electricity reaching the small cities and towns has improved considerably, the current scenario is still far from the best. A large population of students who come to the station to study every day come from family backgrounds where they face issues accessing power and proper facilities. We all know that railway stations have 24X7 power availability. Hence, these students sit at the railway station’s platform to study for their exams and fulfill their dreams.

The episode of Sasaram is enough to tell about the extent to which aspirants can go to study for one of the most prominent exams in the country. The UPSC Civil Servants result for 2020 has been in the news lately. Another bunch of aspirants is preparing for the exam to become the next IAS civil servant. They wish to serve the country.