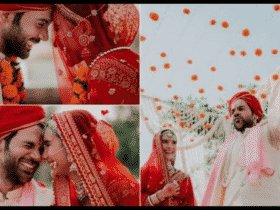 Rajkummar Rao And Patralekhaa Get Married!

Suniel Shetty, speaking to the media in Tulu, said, “The film Tadap has a compelling plot and will be distributed internationally on December 3rd. For the previous week, Ahan has been marketing the picture. We had to delay the publication for a year due to the epidemic.

“Releasing a film now is difficult because we haven’t fully recovered from the pandemic.” Because the storey of the film requires a large screen, we had to wait a year for its release. See how filmmaker Rohit Shetty used his film ‘Sooryavanshi’ to draw crowds to the theatre “he stated

“It took me 25 years to grasp a character. But Ahan has done a terrific job in the film in knowing his role, which is commendable. It’s great that our family is present in the film industry. This is a positive thing since we like and debate our work “Suniel Shetty expressed his thoughts.

When asked if he discussed the script with his father, Ahan Shetty replied, “My father has given me entire creative control over the writing. My entire emphasis is on my performance. He always tells us that we’re special.”

So, what’s up with Katrina and Vicky’s wedding?

Tadap, Ahan Shetty’s debut film, is gathering traction at the box office. After a strong showing of Rs 5.35 crore on Sunday, the Milan Luthria-directed film has now amassed a total of Rs 13.52 crore.

Taran Adarsh, a film trade analyst, provided the latest box office data for the Ahan Shetty-Tara Sutaria movie on Monday. He noted in a tweet that the film is growing despite the fact that it features ‘fresh faces.’