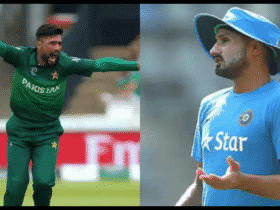 Harbhajan Singh And Mohammad Amir Get Into An Ugly Twitter Fight

Just when we thought nothing worse could happen to the world than a pandemic, a new breed of ignorant humans emerged namely “Anti-vaxxers” and “Anti Maskers”. Let’s just say that if Covid is the enemy of humanity, these people who are openly advocating and instigating against the use of masks and vaccines are a bigger threat to the human race. With their irresponsible views, they not only risk their own lives but deliberately put the lives of entire communities in danger. But what’s depressing is that a lot of public figures, celebrities, and artists who people look up to are showing anti-vaxx sentiments. This is even more dangerous because these famous personalities can directly influence the masses. Thus, they should not peddle such irresponsible opinions. One such artist is Letitia Wright a.k.a Shuri who played T’Challa’s sister in the MCU movie Black Panther which starred the late Chadwick Boseman as the much-loved lead actor.

Letitia Wright played her part marvelously well amidst an all-black star cast, a first for Hollywood. She is currently on set ‘Black Panther: Wakanda Forever’. The character of Shuri may be taking the place of her brother as the next Black Panther. However, in complete contrast to Shuri who is an extremely intelligent, technologically savvy person, Letitia is still peddling Anti Vaxx sentiments. What started off on Twitter as a series of Tweets casting aspersions on the legitimacy of the Covid-19 vaccines, Letitia also tweeted about alleged conspiracy theories around vaccinations. She had received severe backlash for the tweets back in 2020. She even deleted her Social Media account and issued a statement about the same.

However, her anti vaxx stand continues to foster on the sets of Wakanda Forever which is no doubt troubling for the makers of MCU. Marvel may not recast her despite the rumors.

The Anti Vaccination movement is quite widespread in Hollywood. Letitia is one of many popular figures who have openly expressed their controversial take on taking the Covid vaccines. Recently, Nicki Minaj had also tweeted bizarre claims about impotency among vaccinated people.

Shuri and Letitia Wright turn out to be different people

The adage goes ‘Art imitates life’. But in the case of Black Panther, Shuri and Letitia Wright have turned out to be different people. Shuri is a brilliant scientist. She wouldn’t be caught dead spewing unscientific theories. However, Letitia has disappointed fans and followers of Black Panther by being vocal on her vaccine views. In her case, life has not imitated art but is a complete contrast.

Who is Letitia Wright?

Letitia Wright is a Guyanese-born English actress who is now also an American and Hollywood star. She came on Television and received a PrimeTime Emmy Award nomination. She rose to stardom for her portrayal of ‘Shuri’ in Black Panther and the subsequent Avengers movies for which she received a BAFTA Rising Star Award. Letitia has been trending recently in the news.

Will Letitia be recast?

Turns out, Marvel may not be recasting Letitia as Suri despite the speculations and rumors. This may be because she is already filming. And it’s too late to replace her due to the delay in the Black Panther sequel. Also, many Hollywood stars are joining the Anti Vaxx bandwagon. Looks like Marvel couldn’t be bothered as long as the stars fulfill their roles.