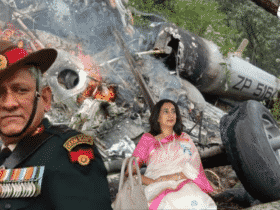 Chief of Defence Gen. Bipin Rawat And 12 others Die Due To Helicopter Crash

KL Rahul and Athiya Shetty have finally made their romance Instagram public after months of speculation. KL Rahul tweeted images of himself and Athiya with a loving remark on Athiya’s birthday.

On Friday, cricketer KL Rahul announced his romance with actress Athiya Shetty, who is 29 years old.

The 29-year-old sports star shared two photos with the birthday girl, laughing and making silly faces at the camera, in a heartfelt Instagram post.

His caption stated, “Happy birthday my (love emoji).” There are presently over 2.3 million likes on the post, with more on the way.

Athiya and Rahul are spotted together not one but several times. They have, however, always kept their connection a well-guarded secret. Just like Virat and Anushka did.

KL Rahul and Athiya Shetty are together!

The announcement came after Rahul led Team India to a convincing win over Scotland in the ongoing ICC T20 World Cup 2021 at Dubai International Cricket Stadium’s Group 2 Super 12 match. Interestingly, Athiya was present at the stadium during the match against Scotland, cheering on Rahul and Team India. The camera switched to the stands as Rahul scored his fifty. Also, Athiya was seen clapping alongside Rohit Sharma’s Wife, Ritika Sajdeh.

KL Rahul listed Athiya as his partner before travelling for the World Test Championship Final in England.

“Last month, the couple left India together for the World Test Championship in England. The logistical staff had asked all players for the names of persons travelling with them before they left. Players have to identify whether they are travelling with wives or partners. That’s when KL Rahul listed Athiya Shetty as his companion. She travelled in the same bubble and stayed in Southampton with the team,” the source had revealed.

In terms of her acting career, Athiya was most recently seen in Nawazuddin Siddiqui’s Motichoor Chaknachoor.