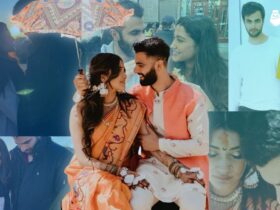 Ankur Rathee and Anuja Joshi Ties Knot In The Most Classy Fairytale Setting!

The 64th Annual Grammy 2022 was broadcasted live from Las Vegas on Sunday night, barely one week after the extremely controversial Oscars ceremony.

The Recording Academy has had a difficult few years, dealing with internal strife, accusations of backdoor dealing, and the defection of some of music’s biggest names: Drake and The Weeknd have publicly questioned the Grammy’s legitimacy, while Kanye West has been barred from this year’s ceremony due to “concerning online behaviour.”

Check these 4 worth watching moments from Grammy 2022!

It was certainly a ridiculous “bit” when Dua Lipa and Megan Thee Stallion walked to the stage in nearly identical clothes – but the result was worth it.

“I was assured I’d get the exclusive,” Dua Lipa grumbled. “I’m going to have to talk to Donatella about it.”

The designer then walked onto the stage, ripped parts of the singers’ costumes off, and restyled them on the spot.

It was a rerun of Bucks Fizz’s Eurovision performance (ask your gran).

Summer Of Soul, Questlove’s wonderful, soul-restoring film, won best documentary at the Oscars last week. However, as you may know, his big moment was overshadowed by the events that occurred just before it – when Will Smith slapped award presenter and comedian Chris Rock.

He had better luck at the Grammys, where Summer Of Soul won best music picture as well. However, he couldn’t help but make a joke about the events of the previous week.

“I’m going to deliver this award and I trust that you people will keep 500 feet away from me,” he joked as he handed Silk Sonic the prize for song of the year for Leave the Door Open.

When SZA and Doja Cat won their first (and obviously well-deserved) Grammy for best pop duo/group performance for their song “Kiss Me More,” one of TIME’s picks for song of the summer in 2021, there was hardly a dry eye in the house.

While the win was memorable for many reasons, you might wanna know some of them.

• Doja being in the bathroom when it was announced

It was Doja and SZA’s tearful and beautiful appreciation for each other. Moreover, it reflected in their acceptance speeches that provided one of the night’s most heartwarming moments.

Industry kid and prolific tweeter Lil Nas X, who gave one of the night’s most energetic performances, knows the zeitgeist like no other contemporary artist.

Lil Nas X performed a brilliant, well-paced medley. Moreover, it was as joyful as it was entertaining, drawing on four songs from his album Montero. Also, featuring a cheeky guest appearance from rapper Jack Harlow. To put it another way, Lil Nas X knows how to do the job—and the Grammys benefited as a result.