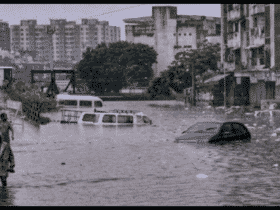 Kangana Ranaut as Indira Gandhi is going to stun all of us. The first look of the movie gave us all goosebumps. She looks phenomenal as Indira Gandhi and will surely fit into her shoes. The Director of this movie is Kangana herself. Emergency Movie is going to be Kangana’s second movie as a director. The makeup artist who got her Prime minster look perfect is none other than David Malinowski. Also, he is Oscar winning make up artist who won the movie ‘The Darkest Hour.

The first look from the movie stunned us all. The resemblance between late Prime Minister, Indira Gandhi and Kangana Ranaut is uncanny. Meanwhile, The emergency in India lasted from 1975 to 1977. This was for almost 21 months. This period is often known as one of the most controversial periods in entire India’s politics. We all know that Indira Gandhi is one of the most powerful women India has ever seen. Kangana also released a video clipping on Instagram as well.

Kangana herself released the first look on Instagram which made the audience go awe all over it. She also released small footage as well. The teaser was powerful enough to create a buzz around the industry. We all are so thrilled to see how Kangana will portray the role of one of the most powerful Indian Women. Also considered one of the controversial women of India. The teaser seems promising. Netizens have gone crazy about the resemblance of the actor to the late prime minister.

Kangana’s dialogue delivery in the teaser is remarkable too. We are hopeful to see this movie which will uncover the facts of an emergency. We all know how versatile an actor she is. Netizens are hopeful Kangana Ranaut won’t let us down. The audience is saying this is going to be an award-winning performance as well. Meanwhile on the other hand many aren’t happy that Kangana is going to direct the movie. Also, she is known for her biased strong political opinions. This might be the reason for it as well.