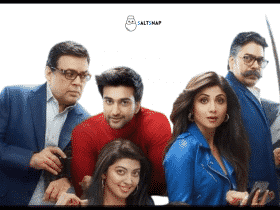 Hungama 2 Trailer: The Laughter Riot is Back

‘Chakda Xpress,’ a film starring Anushka Sharma and inspired by the life and times of former Indian cricket captain Jhulan Goswami, will be available on Netflix.

The film follows one of the fastest female pacers in world cricket history as she rises through the ranks, despite the numerous obstacles posed by misogynistic politicians, to realise her one and only dream: to play cricket.

‘Chakda Xpress is in direction of Prosit Roy and the producer is Anushka Sharma and also her brother Karnesh Sharma’s, Clean Slate Filmz.

“It’s a truly unique film since it’s ultimately a story of immense sacrifice. Chakda Xpress is based on former Indian captain Jhulan Goswami’s life. Also, it will provide insight into the world of women’s cricket.”

As stated by Anushka Sharma in a recent statement in one of her interviews.

“When Jhulan decided to become a cricketer and represent her country in the international arena, it was extremely difficult for women to even consider taking up the sport. Also, this film is a dramatic portrayal of various events that affected her life. Moreover, to the women’s cricket as well,” the actor stated, describing the film as an underdog story in Indian cricket history.

Are We Getting a Keeping Up With The Kardashians Spin-Off?

Goswami also discussed the difficulties she experienced early in her career when the popular belief was that “women can’t play cricket.”

“Chakda Xpress is now filming,” remarked the all-rounder. “See you on the field,” says the narrator.

Additionally, according to producer Karnesh Sharma, “Chakda Xpress is a one-of-a-kind story of an Indian pioneer in women’s cricket.”

“Moreover, we are deeply honoured and proud to bring this story of an unlikely champion. Also, her contribution to Indian cricket to Netflix,” said Pratiksha Rao, Director, Films and also Licensing, Netflix India. “We are thrilled to partner with Clean Slate Filmz. Moreover, with Anushka Sharma, who has won audiences through the many unique roles she’s performed with heartfelt emotion and passion.”