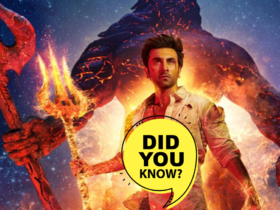 Brahmastra Facts: 5 Mind Blowing Details That Will Stun You!

The twin boys, who were given the names Uyir and Ulagam, were welcomed into the world by South Indian actress Nayanthara and her husband Vignesh Shivan. In Tamil, Uyir signifies “life,” and Ulagam means “world.”

He stated: “Nayan and I are now known as Amma and Appa. We are fortunate to have twin male babies. All of our prayers, the blessings of our ancestors, and all of the wonderful manifestations made have joined together to form two blessed kids.”

He also uploaded a photo of the pair kissing and clutching their baby’s feet.

In the same tweet, they asked for their fans’ blessings and disclosed the names of their twin boys. As soon as he announced the news, the pair received a barrage of congratulations from both celebrities and followers. Everyone is really happy for the two.

The birth of their child, which came as a welcome surprise to the millions of their followers worldwide, came after Nayanthara and Vignesh Shivan’s lavish wedding on June 9. Although it is still not sure that the couple conceived the sons through surrogacy, but a surprise announcement strongly suggests that they did.

A surprise announcement by Nayanthara and Vignesh

In India, their wedding was lavishly and formally celebrated. Their celebrity-studded wedding included actors like Vijay Sethupathi, Shah Rukh Khan, and Rajinikanth. The pair routinely take trips to Dubai and posts photos of themselves celebrating important life events there. Mainly their birthdays.

One of the most adored and respected celebrities in South India is Nayanthara. She recently appeared in the movie “GodFather,” which also starred Chiranjeevi and Salman Khan. Moreover. She is now collaborating on the film “Jawan” by filmmaker Atlee with Shah Rukh Khan.