Since the release of his last film, Zero, three years ago, SRK fans have been left high and dry. With the continuing Aryan Khan drug scandal that engulfed the country last month, it’s clear that the superstar has put his projects on hold for the time being. Everyone is eagerly for the upcoming movies of SRK.

Shahrukh Khan’s charisma has not been seen on the big screen in more than three years.

In 2018, he released ‘Zero,’ which also starred Anushka Sharma and Katrina Kaif.

The picture was a flop since it did not garner a positive reception from the public, especially in the second half.

However, his admirers will be relieved in the coming year, as these are the upcoming movies of SRK projects to look forward to:

This is a major film that all fans are anticipating. John Abraham and Deepika Padukone will also play significant roles in the film. The film, directed by Siddharth Anand, is expected to have some high-octane action sequences. A significant portion of the film is from Spain.

Shah Rukh Khan and South director Atlee collaborated on this film. According to reports, SRK would portray both an Indian intelligence official and a lawbreaker in the film. Mid Day reports that “Atlee had the plot and a few spectacular passages in mind when he approached the superstar. The entire script is now complete.

Also read: Avatar 2 trailer is out!

He flew down to Mumbai in March to give Shah Rukh Khan the final narration at Mannat. The actor was so happy with it that he agreed right away. Shah Rukh and his close buddy Karan Johar will produce the stylized action drama.”

The movie will feature the superstar in the lead role of a journalist. Moreover, the film is based on the life of Nambi Narayanan, a former Indian Space Research Organization scientist and aeronautical engineer.

Shah Rukh Khan is gearing up for his next production, Dunki, helmed by Rajkumar Hirani. A photo of the superstar and the director who has taken on the set of the film is going viral. Moreover, SRK and Rajkumar Hirani are joyfully posing with a few admirers in the photo. 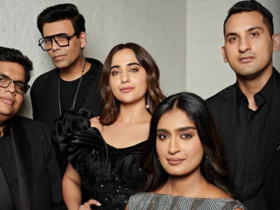